Idon’t like to define myself because it’s limiting”, says Rossy de Palma, who arrives accompanied by her children, Gabriel and Luna, both polite, friendly and fortunate to have inherited their mother’s creative talent. Over the years, Rossy has had an extensive international career as an actress, singer and model, best known for her films by Pedro Almodóvar as well as other well-known directors such as Robert Altman and Mike Figgis. She has collaborated with George Michael and Rosalia and has had her work awarded with an official medal of the Order of Arts and Letters in France.

Years ago, Rossy’s passion for photography started with her old Polaroid camera, but it has been the immediacy of modern technology that has inspired her to delve deeper into her creativity. Her recent work is now exhibited at the new project from renowned art curator and art advisor, Mercedes Estarellas, which is located at the Kaplan Projects Gallery in Palma. “It’s about faceless self-portraits based on a monologue that I wrote for the Piccolo Theatre in Milan. It had so much success that I thought I would bring it to Mallorca. It is called Resilienza d’Amore and it explores how the faces of vampires instantly grab our attention. I really enjoy working with camouflage through covering female figures and masking their identities. This idea came from something accidental, which I am able to demonstrate all over the world, from the Massai Mara to Mexico to the Acropolis in Athens but, the most important thing is that it always has to be related to the feminine universe and the covering of the head. It is how I show what women carry in life – my work has a Dadaist vision and elements of visual poetry. ”

Rossy explains that she is inspired by Martha Graham, Pessoa and Krishnamurti. “From a very young age, I started writing poetry, and my grandmother kept everything. Devoting yourself to the artistic world is a salvation, because there are no borders – art is the only thing that matters. The only borders I believe in are gastronomic. I see capricious geopolitics, like the religions that we invent. It would be ideal if we had a great world leader, ideally a compassionate and intelligent woman, who would take care of the global imbalance and not worsen the situation where we have people dying trying to reach Europe in boats. ”

When her work allows it, Rossy returns to Mallorca. She loves the light on the island and tries not to miss the sunset when she’s here. “It’s a unique event that I never tire of”, she explains. She comes to Mallorca to be with her parents and explore her favourite places on the island, some of which include: arriving at Bar Bosch to eat lobster, going to the cathedral, walking through the Old Town or having an ice cream at Can Joan de S’Aigo.
“I am very Mediterranean and I enjoy the simplest pleasures. My favourite season is Autumn In September and October I go to the beach with not a worry in the world, or I walk through the countryside. I never miss my dinner date at the Sadrassana restaurant with my friends Susy Gómez and Juan Antonio Horrach, where they make the best cocas de patata desestructuradas. It’s in Atarazanas Plaza Sadrasana and it brings back so many memories of my youth. I also love going to Punta Negra Hotel very much.” 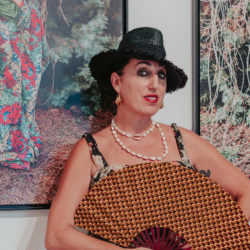