Eating slowly and deliberately is the maxim of the association known as ‘Slow Food’. The counterculture to fast food – which was exported in the ‘70s from the US to Europe – was born in Rome in 1986. A group of Italian intellectuals, led by journalist Carlo Petrini, demonstrated against the opening of a McDonald’s restaurant on the other side of the Spanish Steps, by holding a sumptuous spaghetti meal. Since then, the network has grown year after year. Globally, Slow Food has more than 100,000 followers and about 1,200 groups called Convivium.

In Mallorca, the activist Laura Buadas founded the Balearic group about four years ago. It already has more than 250.

What was the reason for you starting a campaign against McDonald’s and the likes on the island?
I would not call the movement a “campaign”. We don´t fight anybody. Rather, we provide an alternative for people who are environmentally conscious and prefer healthy food. I myself come from a family where food and its preparation were always a very high priority. Several years ago, I attended a conference of the network Terra Madre in Turin, which is associated with the Slow Food movement. Their concept of sustainable methods of food production, in line with the regional nature of our landscape and tradition, convinced me. So I decided to found a Slow Food group in my home, along with friends.

What is your role?
We see ourselves primarily as an intermediary between producers and consumers. We are a kind of food community. The Slow Food policy is that the local production of meat, dairy products, fruit and vegetables should be good, clean and fair. Well, clean in terms of freshness and flavour, chemical-free and produced sustainably. And fair in terms of a dignified and fair payment for producers and a reasonable price paid by the consumer.

How does this system work in practice?
Quite simply: We seek and support farmers, who grow and produce vegetables, meat or other foods on the island, according to our guidelines. Then we inform consumers about our homepage, where you can buy these foods.

This really sounds very simple. But it is difficult, unfortunately. The demand for organic and sustainably produced food in the Balearic Islands is much greater than the supply. It is very difficult for the producers to compete with the existing range of mass-produced foods. The production of foods with ingredients derived from the region using traditional farming methods only is already a big problem. A good example for this is the Mallorcan sausage sobrassada.

What is the problem? Pigs are, after all, bred in Mallorca.
The meat used in most commercially available ‘sobrassadas’ does not come from the island, but is imported from Poland or Ukraine. The second ingredient, the milled pepper, had ceased to be grown in Mallorca until a few years ago. This is another part of our work: one of our most successful campaigns was the reintroduction of the native peppers here.

Together with agronomists and agricultural experts, we have managed to bring the seeds of the peppers back to the island. Through workshops, we have shown the farmers how to grind the pepper by traditional means to use it for the production of sobrassada.

To what extent are you getting support from the Balearic Ministry of Agriculture?
Political support is zero. Since its combination with the regional Ministry of Presidency two years ago, the regional Ministry of Agriculture de facto does not exist anymore. The new government, under President José Bauzá, has recently decided to close the panel for the award of designations of origin for Balearic products such as wine, oil or sobrassada, for cost reasons. Ecologically and sustainably produced foods are generally far more expensive than the cheap competition from the supermarket shelf.

Is Slow Food only a movement for people who can afford organic food?
Anyone who buys organic at the gourmet store at El Corte Inglés has to dig deep into their pockets. But this is certainly not our goal. The system is actually quite simple: The more middlemen are involved in the sale, the higher the final price for the consumer. For this reason, some time ago we launched an island-wide consumer cooperative. It is a network of Slow Food supporters in all the towns and villages, who buy together directly from organic farmers and producers. The more who participate in such joint purchases, the cheaper the price that each individual must pay.

Where do you actually do your own grocery shopping?
I go many ways. Vegetables and fruit come largely from my own garden. I buy fresh fish at the weekly markets. If the label does not give precise information about where the product comes from, I ask. The meat I buy mostly comes from butchers’ cooperatives or direct from the farm. There are currently many shops selling organic food – and we have the weekly organic food markets on Saturday in Palma and on Sunday in Santa Maria.

Slow Food is to make the world better?
I’m not worried about it as I don’t see myself as a kind of do-gooder. I´m still searching for the universal solution to food problems on Earth.

Our motto is simple: less is more. We’re trying to slow the frenetic pace of our consumer society – not only in eating, but in all areas of life.

Can you earn money with Slow Food?
No. This is not our intention. We understand very clearly that we are a non-profit organization.

How do you make your living?
I work in a creative industry. Much of my spare time is dedicated to the Slow Food movement. By the way, food is an absolutely creative medium, because it connects so many different things. It starts with the design of a dining table and ends with the serving of the food on your plate. 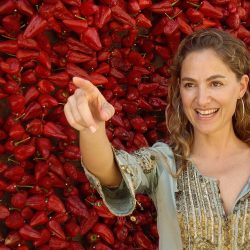 A Mediterranean Pace of Life