Over the last year, many of us have been forced to rethink our homes. When the world grinded to a halt, we had to confront a few home truths. We finally felt brave enough to admit that: we really didn’t like living in the city, we could no longer bear our tiny gardens, and we really didn’t want to be in Northern Europe at all. It was the Mediterranean calling – a life in Mallorca perhaps, with its great infrastructure, international schools and endless sunshine.

With this wave of new prospective buyers wanting to move to Mallorca (but with no certainty of being able to travel), the island’s real estate market had to adapt. Instead of seeing properties in person, the process moved online ensuing digital viewings to sky-rocket around the world. In Mallorca, Piers Lloyd-Cox and Michael Schwalbach from Sandberg Estates weren’t surprised by the digital boom at all. “For us going digital just made sense,” says Michael, co-founder of the high-end agency in Santa Catalina. “Even before the pandemic, we found that video viewings worked well. Our clients are busy people so it’s always been a more efficient way of saving time, both for us and for them.”

The detail is in the digital

The increase in selling properties digitally has meant that Piers and Michael have had to re-examine how they communicate with their clients. Without face-to-face interaction, they say that the most important thing is going into as much detail as possible. Armed with just a camera and a pair of headphones, Piers says the challenge is often in transmitting the size and proportion of their properties. “We try to be as thorough as possible, both visually and in our descriptions. We put ourselves in the shoes of the buyer giving precedence to things like space and natural light.” He adds that a detailed floor plan is also provided in an online viewing, giving clients a point of reference as he leads with the camera.

With video calls happening across Whatsapp and Facetime, Sandberg Estates are selling properties without buyers having ever stepped foot on Mallorca. Remarkable it might be to some, Piers and Michael highlight that it all comes down to trust. Both of them grew up in Mallorca within expat families so understand the cultural differences for newcomers to the island. Michael, who is half-German, half-Swedish talks of a recent client from Germany who bought a multi-million villa in Son Vida without seeing the property in person. “We talked him through the process every step of the way and since we both grew up in this part of Palma, we were able to give him all the information he needed to decide.” Within a couple of weeks, the client phoned Michael to sign on the dotted line – again, carried out entirely via computer.

And the future for real estate in Mallorca? Piers and Michael say they look to the likes of property hotspots Los Angeles and London as the blaze-runners in digital property. “For sure the technology is only going to become even more detailed. Editing will get slicker, properties will sell more via social media and drones will be employed,” says Piers who has recently invested in new cameras and programming equipment. However, the idea that Sandberg Estates will go entirely online is unlikely with the recent opening of their second office in Puerto Portals. It seems however detailed and progressive digital is, there will always be the desire to buy a property with two feet in Mallorca – with more rolling waves and less rolling cameras. At least for the moment. 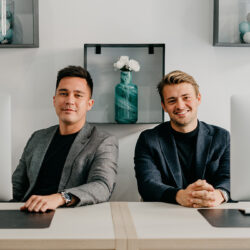 Any questions related to How the digital property market in Mallorca went digital?