The Cappuccino Cafés are well known far beyond Mallorca. The cappuccino served in all of the cafés has the same fine flavour, as a strict concept of quality is the company’s philosophy. Many might have been tempted to copy the successful concept, but this would be hard to achieve. There is a passionate head pulling the strings behind the scenes to ensure premium quality, exclusive design and selected employees: The entrepreneur Picornell himself who is driven by his perseverance and his courage to risk new ventures.

Lately, the glasses for the freshly squeezed orange juice are placed on a coaster with a lush flower decor that makes the coaster look like a printed piece of fabric. Juan Picornell liked the design for his Cappuccino Cafés and so a decision was quickly made and the new coasters were ordered. The young Mallorcan businessman is used to taking decisions quickly and unerringly. If it comes to making things good or better, there are hardly any limits for Juan Picornell. He would never be satisfied with products of an average quality, as he loves perfection. In return he is anything but close-fisted. The new bar stools were bought because they were beautiful and matched the concept well, even though they were more expensive than the bistro’s chairs. The art and music selection of Juan’s localities reflects his personal passion.

Three DJ’s are working for him full-time and are organising, buying and mixing the music, to entertain the guests while sipping their glass of cava. Over the years this ended in a huge collection of music and enough songs to last two weeks without playing anyone twice. Reason enough to produce the first Cappuccino CD much to the delight of the guests who bought almost ten thousand copies within five months.

For Juan Picornell, what counts is the quality in all his restaurants and to ensure that it is on an equally high level. This includes all areas: starting with the careful selection of employees, over the fittings up to the hot, fragrant cappuccino.The entrepreneur spares neither effort nor time to achieve this and even the cleaning is self-directed. Almost two dozen workers take care of the perfect look. More than two hundred candidates are interviewed every week in order to find two suitable employees for the restaurants. Those will then be trained in the Cappuccino Cafés in the Calle San Miguel in Palma to learn the philosophy reigning at the counter, the kitchen and the service. At the end of the day every employee needs to know how to prepare that perfect Cappuccino. Finally, a well-considered decision is made in which Bistro the new employee will work. Working in the Cappuccino in the port of Portals Nous requires to be almost an athlete. The large terrace can only be reached over the big external staircase, which means up and down the stairs all day.

Juan Picornell knows that he expects a lot from his employees and sets a good example. The self-made man coordinates nine restaurants personally. A franchising system in order to expand his business is no longer an option, as this means sacrificing the personal contact to each restaurant. Therefore, the Cappuccino in Menorca, run as a franchise, will remain the only one, as the results of the trial did not convince the businessman. Overall, the success story of the Mallorcan entrepreneur is a mixture of courage to learn his lessons and the enthusiasm to convert those lessons learnt into successes in the most efficient manner. His family could witness his passion for restaurants and bars already at an early age.

At the tender age of five he changed his home into a discotheque and invited his friends around. At the age of 15 he was working in a bar, two years later he opened his first business. His father had died the year before and maybe it was his feeling of responsibility for his mother and his younger siblings, which pushed the young man forward. There were another two bars to follow before he opened the first Cappuccino in Palmanova in 1993, at the tender age of 21. This time he wanted it to be more than just” a bar and laid the foundation of the Cappuccino Group.

In 1995 the second Cappuccino opened on the Paseo Marítimo in Palma, 1998 another one in the Calle San Miguel, the step to Menorca followed in 2000 and finally the Cappuccino in Puerto Portals was opened in 2001.

The big surprise was yet to come in 2002; instead of opening another Cappuccino, Picornell decided to open the ultra trendy Japanese restaurant Tahini. The Tahini was created from the enthusiasm of the active entrepreneur for minimalism. The fact that in the end it did not become such a minimalist restaurant after all was Picornell’s realisation that pure minimalism was not his style, being more of a classical type himself.

However, the idea was there and was realised in the well known strive for perfection. It should be Japanese, so the business man travelled to Japan a couple of times in order to experience on site and to hire some local chefs. Cappuccino in the prime location of Palau March in Palma opened in 2004.

The locations are selected and unrivalled in their way. Some of the locations are owned, others are rented and none of them were snapshots – Juan Picornell selects very carefully.

If he likes a locality and has the suitable idea, time seems to play no role for the Mallorcan businessman. An entirely new project is set in the port of Andratx: the first hotel of the group. Fully completed it is waiting for guests, which are not allowed to come and stay yet, as the opening permission from the authorities is still pending. Ideas and power is something, which Picornell has in abundance. Before this year’s end he will open the first take-away, which will sell the famous Cappuccino sandwiches. The step into new countries has also been planned long ago.

London would be his favoured location for a new Cappuccino. Picornells mother is English and he fell in love with the English capital a long time ago. So it will only be a matter of time until the British can enjoy the fine Cappuccino of their favourite holiday location in their own country. 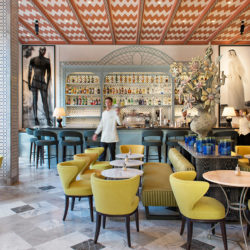