Entering the hotel, one gets a sense of the hotel’s 16th century origins as a home. The calm atmosphere resonates from the original exposed stone floor and walls, a tree trunk forms a creative lighting feature over the bar of the lobby, behind which crates serve as the bar’s shelving. Outside, a pavilion offers welcome shade for peaceful and relaxing moments in the abundant garden. What originally developed out of spontaneous creativity and financial necessity has given this hotel its unique character. Fortunately for the owners, the concept of upcycling has become even more topical recently. Their creative touch can be seen throughout the Pink Pepper Tree which gets its name from the spectacular peppercorn tree whose pink berries drape near the pool.

“Instead of throwing away old things, we thought about how we can use them in another way. The tree trunk was simply too good to throw away,” Jacqueline Rozenhart recalls of the feature in the lobby. “Upcycling means to look at something in an open and new way,” she explains. “You look at what you’ve got and how you can use it again and, in this, you can be creative, playful and fun.” It was with this thinking, the couple have created a unique and thoughtful interior. For example by transforming antique beams of olive wood into washbasin stands and shelves.

New life has also been given to old chairs, now fixed high on a wall to be used as a rail for bathrobes and clothes, and shelf for towels– a humourous alternative to space-consuming wardrobes that hide objects away. “Now guests never leave anything behind,” laughs Glynn Jones. “We hadn’t planned on creating a design hotel but each room is individual and unique.”

Light-flooded and open rooms, together with an abundance of natural materials create a cosy atmosphere nestled in the idyllic surroundings of Lloseta’s countryside. Details such as lamps fashioned from straw hats, paintings and positive sayings embroidered on cloth give each of the eight rooms a special hands-on touch. “Since the renovation work finished, the idea of upcycling has developed into one of sustainability,” said Glynn, “and looking at how we deal with daily situations.”

The seven R’s: Rethink, Refuse, Reduce, Repurpose, Reuse, Recycle, and Rot are key for the hotel owners. “Besides having our own compost system, we try to produce as little rubbish as possible and also grow most of our food ourselves – fruit and vegetables all come from our own garden.” And because much of the produce ripens at the same time, the couple has bought a dehydration machine to increase the lifespan of their seasonal harvests. “We buy the rest from local businesses and will soon also get our own hens which will eat any leftovers.”

“Life is about creating good cycles,” says Glynn with conviction. The hotel’s drinking water solution was provided by the local company Cleanwave, whilst solar panels provide hot water and electricity. “A basic requirement, though, is good thermal insulation in the walls as well as high-quality double-glazed windows, to ensure minimum consumption.”

The Pink Pepper Tree Hotel has also made a name for itself with natural wine tastings. “I think we just attract people who think in the same way as we do,” he says, explaining the success of the hotel which the Telegraph lists as one of the “Most special places to stay.” The hotel even offers yoga and meditation, with instructors giving lessons either in the garden, on a private balcony or in the wellness area. During guided meditative walks in the mountains, guests can learn about conscious breathing and experiencing life through all the senses.

Guests started to ask questions about their sustainable approach, inspired by the hotel owners’ lifestyle. “We just try to lead the way by setting a good example.” Perhaps the hotel industry has something to learn from the Pink Pepper Tree? “Besides reviewing hotels with stars, there should also be an energy or recycling label,” says Glynn. “This would be a useful rating system for the future.” 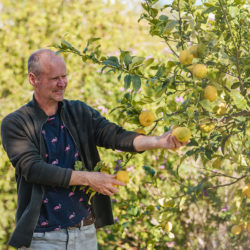 The Cleanwave mission: stopping a sea of plastic