In a temperature-controlled warehouse covering 350 m2, which has been converted into a commercial photography studio, Mallorcan photographer Nando Esteva gives his imagination free rein, transforms commissions from some of the top national and international brands into meticulous images an d videos and somehow finds the time during his long working days to give shape to groundbreaking and daring projects which leave no-one indifferent. As a result, he has been awarded various prizes in the latest editions of the LUX National Professional Photography Contest as well as prominent recognition at international competitions.

‘Hidden’ in a street in his native Palma, Nando is a confident young man, who is largely unfazed by all the praise and recognition his work is receiving. He recalls how he threw himself into photography as an adolescent and says that despite positive critiques his feet remain firmly on the ground. “I don’t consider myself an artist,” he says, but he does however admit that some of the commissions he prepares for well-known multinationals “derive from art”. “Maybe I am getting into the world of art without actually realising. For me it is a way to get out of the daily pressure of commercial work. I want to change inspiration and create photos which relax you a lot more. I don’t consider myself artistic, but art does inspire me in the creation process. ”

One of his great passions is food and the world of cuisine, within which he does not hesitate to say, “I want to achieve a coup. I think we need a renovation; cuisine needs to get back to its roots through people doing modern things. There are already clients in Mallorca and further afield who believe in my system…I will portray the image which symbolises the change.” One of the clients who has opted for Esteva’s particular innovation is the recently opened Tristán, which he has just completed a project for, coinciding with this well-known restaurant in Puerto Portals’ decision to completely reinvent its exquisite offering.

“I met with the people from the Tristán Group and they expressed their desire for a radical change,” Esteva explains.

“The Tristán Mar is a new type of restaurant, very different already to the Michelin star establishment it used to be, based on natural themes, Mediterranean and maritime concepts, for locals and foreigners, with a cuisine which is closer to home” and directed by prestigious chef Gerhard Schwaiger.

Schwaiger himself dominates the central part of the Tristán project, as you will be able to see from the photographs which illustrate this article. Within the 150 photographs which make up the project, Nando Esteva has captured 10 images of the chef fishing, on a boat or carrying the produce which is delivered to the restaurant’s kitchen. The work also includes a series of shots of seafood displayed on the wooden crates which are used to deliver it and Esteva has tried to reflect “the nature and spontaneity of freshly caught fish and seafood” which is very much in line with the busines’s new philosophy. The work is exhibited in the restaurant’s main dining area in order to attract attention, which is “very important in these times of crisis”, to create a focal point which will prompt discussion or as an example of what Esteva describes as a “commercial attack” to “capture what we want without sacrificing artistic elegance.”

Another one of his most recent projects is ‘250gr de tacón’, ‘250g of heels’, a collection of photographs conceived through commercial campaigns for shoes by top brands such as Camper or Farrutx, which will be exhibited soon at the art gallery ABA, in the Lonja area of Palma. “Each person interprets a photograph in a different way, be it commercial or artistic. They are many ways of looking at things. For example, for ’250gr de tacón’, I have not provided any explanations, it is a new image which has been fused together, which may or may not work. In this project I was looking to create photos which would not be liked by 50% of the people, that was my challenge, because until now all I have had is compliments.” Esteva strives for artistic confrontation as a therapy against praise, something which is “very important and contradictory at the same time,” he adds.

Braun, Teka, Karlos Arguiñano and Rafael Nadal are just some of the prestigious clients he is currently working with. By transferring the photographic angle in order to connect it to commercial video, by using the latest technologies, Nando Esteva has set up a second business, Cocinando Producciones, which produces television commercials.

His busy schedule doesn’t stop him from dedicating time to charitable projects. After a recent cancer campaign he is considering another two projectsm: one for Alzheimer’s and the other for Diogenes Syndrome.

Although he also has a studio in Madrid, Palma offers him “the peace and tranquility to work in a more relaxed way.” Moreover, he has always wanted to “demonstrate how commercial work can be created on an island and used all over the world. I am proud of the islands, my homeland, and here is where I am most inspired to create and produce work on an international level.”.

He has just won another prize, for an image which will be used to represent the tenth anniversary of the LUX prizes. “We won using a concept which is about what photography means after 20 years.” His mind does not rest and his career has only just begun. 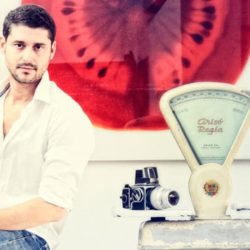