WARNING: This footage is NOT for the fainthearted – there are a lot of comments like “Oh My GOD!” 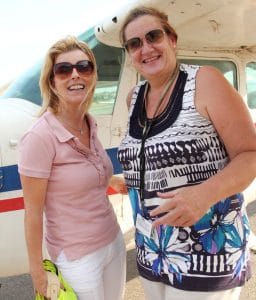 It was an ambition for a long time to fly a fixed wing plane to see if I liked it! After 2 years of ‘sitting on the fence‘ thinking about it I finally got up the courage to call Valeria, the half English, half Spanish flight examiner at The Aviation Centre.  On meeting Valeria there was a lot of reassurance because this lady oozes confidence and capability. When you flight for the first time she is the right person to have sitting by your side.

I was told to sit in the ‘drivers’ seat – poor Jonatan (our young video man) in the back, headphones on, a number of checks later and we were taxiing down the runway.  To show how little prepared I was – I wore 12 cm (5 inch) platforms so when Valeria said now it’s your turn to handle the foot pedals I was shocked.  She mentioned that taxiing is one of the more challenging parts of learning to fly as you have to steer the plane with your feet – pressing the left pedal to veer left and the right pedal to go right. Valeria might have intended that I follow the yellow line but I was no where near the markings!

Once airborne, much to my disbelief that I had finally done it, Valarie offered to fly over my house so off we went in the direction of Son Vida and it was a pity but nobody was home to witness my moment of glory.

One of the more terrifying moments came about 20 minutes into the flight when Valeria showed us what would happen in the event of engine failure. Not totally switching off the engine but lowering it considerable….  we glided through the air as she selected a field for us to ‘crash-land’ – noting that we would probably be fine but that the plane would suffer damage.   Lining us up for a rough landing and being quite to scared to look back at Jonatan’s face which was no doubt a very pale colour, we glided towards the field and took off again just as we were making the final approach. 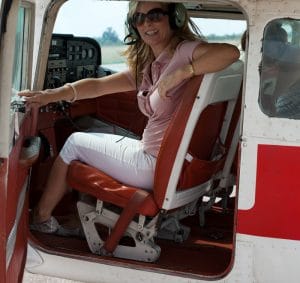 Back again at normal altitude Valeria mentioned once again to relax my hands and smiled at my white knuckles. I’m sure much to Jonatan’s relief,  the instructor told me to head for Son Bonet airfield.  Again lining-up for the runway and still in charge of the steering I was waiting for Valarie to give me the command ‘let go’ but she didn’t and we got closer and closer and she said finally “OK let go” and I did….. as we landed our relief was short lived and off we went again as quickly as we had felt ground beneath us…… Another circuit and Valeria said “this time you land the plane” and after a few bumps here and there we literally plopped to the ground.

Jonatan could not get out of the plane fast enough and when I saw that he was struggling to get his legs under him again I realised that he might soon be looking for a new job!!!

It was an experience that I am so happy I did and it has certainly whet my appetite for more so I will be soon enrolling with The Aviation Centre and hope to have my PPL in time for next summer so we can hop to Ibiza or Menorca whenever the fancy takes us. 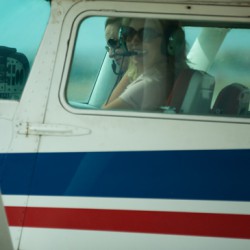