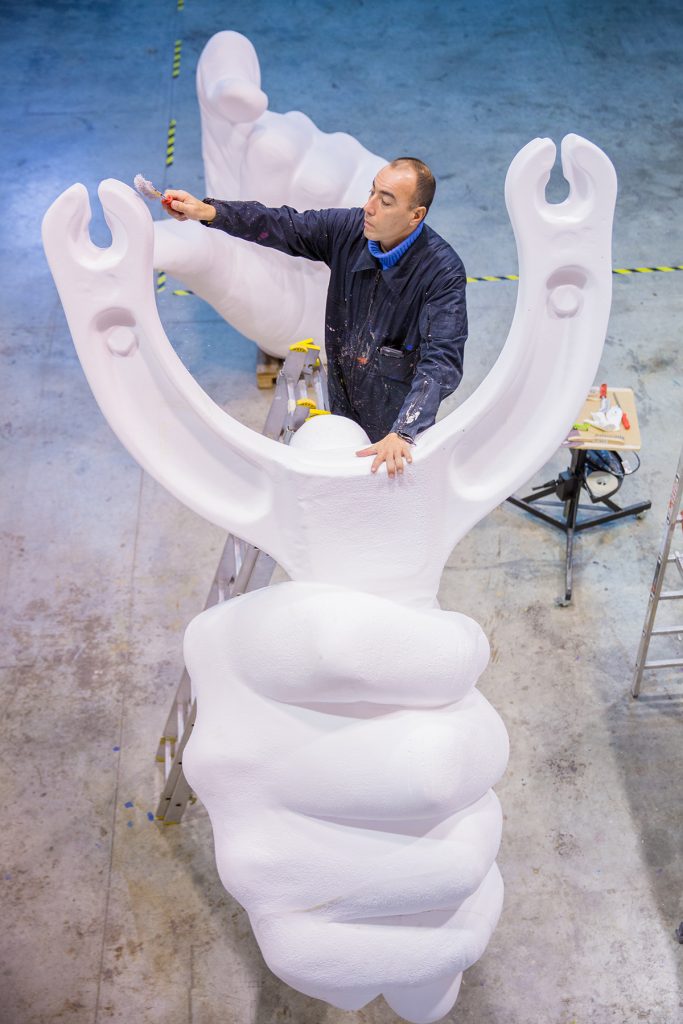 This spring, contemporary artist Lorenzo Quinn installed a sculpture in Venice, Italy, of two giant, muscular hands emerging out of the Grand Canal and onto a beautiful, old palazzo, as if they were were supporting the structure from its eventual fate of being consumed by the rising water levels.

Titled “Support,” this massive installation, which speaks about climate change and our future, has thrown Quinn into the mainstream spotlight: the video of the installation has received over 75 million views on social media so far, and has cast him as a leading environmental artist of our generation, something the artist never intended to happen.

Climate change is absolutely a subject that concerns Quinn, he worries about the future of his children and how we are leaving the world to the next generation, but he insists he is an artist first, and not interested in being a politician or activist. He has been working successfully as an artist for over two decades, creating a powerful body of work that speaks about life, love, human struggles, relationships, as well as the environment. His sculptures of twisting bodies, connecting figures, outstretched hands, sometimes interacting with spheres or cubes that represent the earth, or with each other, resonate with humanity and emotion. The fluidity and movement of his figures is incredibly realised, the details and depth of sculpting calls to mind the work of the 19th-century French artist, Auguste Rodin.

Lorenzo Quinn lives and works in Barcelona and he first came to Mallorca in the late 1980s to shoot a TV series about Aristotle Onassis with his father, the actor Anthony Quinn. He instantly loved the island, and has returned many times to Mallorca for work and pleasure. In 2003, his bronze sculpture titled “Encounters” was placed along the Paseo Maritimo, and he exhibited in several galleries throughout the years. Currently, he is exhibiting a series of paintings and sculptures with Galeria K, in Palma, his first exhibition with the gallery, and in June he installed a sculpture in Puerto Portals titled, Dar y Tomar III. 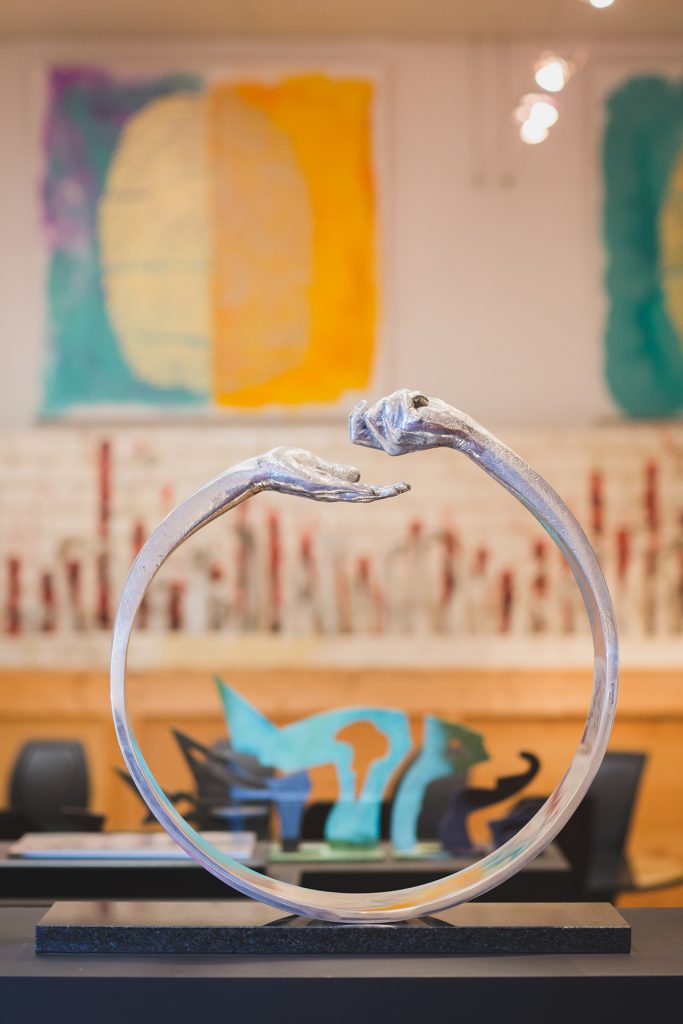 His sculptures convey a sense of duality, almost like a defiance of gravity between the weight of materials, such as bronze, marble or aluminium, and the lightness and movement of the figures themselves. For example, the sculpture, “Force of Nature,” now on view at Galeria K, depicts a woman standing firmly on the ground as she keeps the earth from blowing away by holding onto the ends of a cloth. Her entire body reflects her struggle, her strength, while the cloth and earth seem as if they might fly away at any moment. The juxtaposition between the action and the weight of materials is striking.

Hands are a subject matter that continuously fascinate Quinn, and he is able to convey so much passion, so much meaning in their portrayal. Part of why he is drawn depicting hands, particularly in his public projects, is that he wants people to relate to his work, to see a part of themselves in them and connect with them. With figurative sculpture, there is risk of categorizing by its gender, race, perhaps ethnicity, but hands don’t reveal these qualities, and in this way hands can be more of an international symbol, and as an artist who works with his hands, they are a powerful tool of communication.

This fall is a busy one for Quinn who will unveil a new sculpture in Venice in early September, titled, “Stop Playing,” that shows two large hands holding a slingshot, the rock inside it will be made of Venetian glass, a reference to the fragility of earth, and the slingshot represents our natural resources which we are stretching beyond their limit. As for “Support,” his studio is working with the UN to have the sculpture travel elsewhere. Quinn would love to see it installed on a glacier, with a time-lapse camera that over the course of 6 months or a year, would reveal the melting glacier in the hands of the sculpture, a poignant image from this very talented artist.