Carlos Prieto stumbled upon the art of painting, by accident, when he moved house and changed from the Spanish ESO school system to the Bachiller – with its stronger focus on the arts. He soon became friendly with the artist crowd and, in particular, Manolo Coronado, an artist who took him to his studio for a week and let him paint.

His parents always supported him in his wish to become a painter but, like many other parents of a 17-year-old boy, they were slightly sceptical of their son’s choice of career. They decided to give him an ultimatum of a year to prove himself as an artist and provided him with all the materials he needed to paint, and then exhibit. The outcome confirmed that Carlos has a great talent as all the works sold at his very first exhibition – which he attributes to a lot of good luck and the right timing. Since then he has never looked back. His biggest wish in life is to be able to remain a painter.

One of the biggest inspirations for Carlos is the historic city of Paris, especially during the 1900s. The influence of that period comes through strongly in his artwork as a somewhat decadent opulence à la Moulin Rouge. He joined his girlfriend at that time for what should have been a few days in the “city of love” but wound up staying a year. Although the relationship did not last, she provided him with a very small apartment which he converted into his concept of a studio from the 1900s, covering every wall with his canvases.

At first he did not speak the language and did not know anybody: he lived in complete isolation, without speaking to anyone, and severed any communication with the outside modern world. This experience caused him to become a very introverted person, finding consolation in eras of the past and living like the old masters he read about in books, whilst teaching himself French and walking the dark streets of Paris as a stranger in the night. While his favourite place in Paris is down along the River Seine, every corner made an impression on him, inspiring him to experiment with his art as well as music.

His next trip led him to New York, where he paid the rent with paintings; he was able to afford a small studio in Harlem but soon realised that he had “married himself to Paris and could not divorce himself from the historic city” he had left behind. Even though his
studio in Harlem was physically larger than the one in Paris, it felt small and cramped to him.

Unlike many other painters, Carlos wants his paintings to be straightforward without hidden innuendos. With Carlos, what you see is what you get, although the nature of his work seems to always have an underlying story. Most works are from his imagination and memory. He seldom uses photographs or live models as a base because he is usually so focused on the painting that it develops into something very different from the original subject. Prieto´s artwork carries a very recognisable style, something that is an achievement in itself.

“The basis of art is drawing,” Carlos says. “After that you can do whatever you like.” Like the old masters, he uses oil paints – preferring the quality to other mediums. The solitude of painting in private is the only time he says he truly is himself. Anything else he considers a performance that he puts on as part of the job: “When I paint alone I am a different person.” His paintings are always true to himself, including the commissions he does. Clients may want the painting to match the cushions and curtains of their living room, but in the end, he paints what he would like to see hanging on their wall.

His second greatest love, next to Paris, is the cinema. One of his fantastic dreams is one day to paint a large cinema screen and donate it to the city of Palma. Despite the success of his exhibitions, he remains very down-to-earth and sees success to be relative.

When he stumbled across art – during his education – Carlos might have been a little older than Picasso, but his success to date has been no accident. 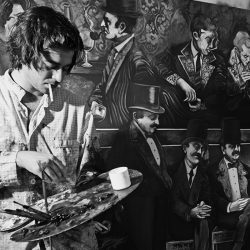 Alma Lopez: A Jewel Worn by the Crown