Once a sleepy, little medieval walled town, Alcúdia woke-up to a property boom several years ago and has been flourishing ever since. The town benefitted from a forward thinking town council. Local officials invested heavily in Alcúdia’s modernisation with a sensitivity that has kept the town’s original aesthetic beauty.

This has translated into somewhere that’s spotlessly clean, well maintained, and beautifully lit at night. It should therefore come as no surprise then that Alcúdia is one of the fifteen towns officially added this year to the list of most beautiful villages in Spain by the association ‘Los Pueblos más Bonitos de España’.

The seaside suburbs which surround the old town offer properties right on the waterfront. This is where the mountains quite literally meet the sea. Here you’ll find breathtaking views, calm warm waters and countryside to die for.

Within the walls of the old town itself, there are quite stringent rules about renovation work. This is to ensure that Alcúdia keeps its character. There’s a limited choice about what colour you’re allowed to paint the outside of your home, for example. All this might sound harsh but after a short stroll around the narrow, pedestrianised streets you’d have to be hard of heart not to be captivated by the magic of this pretty, little town. As difficult or awkward as the rules can be, sometimes they really do make sense.

Alcúdia has also attracted private investment. It’s home to many first-class boutique hotels which have helped to up the area’s game, making it an attractive choice to buy property. Apart from its beauty, what puts Alcúdia ahead of the pack is its strategic position. If you want to enjoy an outdoor life that can incorporate everything from kite-surfing to hiking and cycling to swimming, then look no further.

Where to buy a property in Alcúdia 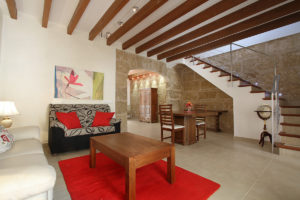 The old walled town is full of townhouses with original features, high ceilings and traditional green shutters. Most are built from warm, coloured sandstone which glows softly by night. There’s a small expat community here. People enjoy the benefits of living in a small town with a ’villagey’ feel but with all the outdoor attractions close by. The sea is just a ten-minute walk away. 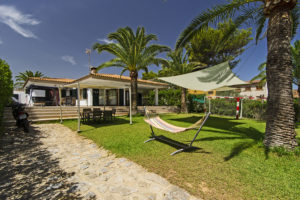 This is a tranquil seaside suburb just a few minutes’ walk from the old town. There’s a small, romantic harbour here overlooking the Bay of Pollensa. Although the coastline is quite rocky, there is a little beach that’s popular with the locals. There’s a 50/50 mix of big, traditionally built houses and more modern homes. If you’re looking for somewhere that’s quiet, Es Barcarés has a sea-view and is just a short walk to the town then this would be a great choice.

Both these upmarket seaside suburbs are within walking distance of the old town but a little further than Es Barcares. In the summer months when it’s very hot, the car might be a better option. Mal Pas is full of big traditional finca-style villas as well as lots of stylish, uber-modern new builds. Property prices are at the higher end. Mal Pas has two very pretty little sandy beaches, San Juan and San Pere. Bonaire is where you’ll find a small, sleepy, marina ideal for home-owners with yachts. 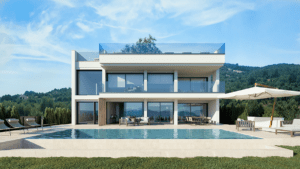 This is Alcúdia’s grandest suburb. First-line properties which look out over the Bay of Alcúdia are amongst the most expensive in the north of the island. Alcanada is also home to a world-class golf course. There’s a pretty pathway along the seafront close to the club that’s ideal for a jog, evening walk or morning stroll at sunrise. Alcanada also has its own beach. The start of the long stretches of white sands found in Port d’Alcúdia and Playa de Muro is just a short walk away. 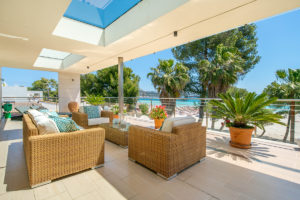 This is the brasher cousin of Alcúdia old town and its more upmarket suburbs. It’s a lively resort, popular with families, and has a huge marina. There are plenty of luxury, penthouse apartments both in the port and along a seafront that stretches down to Playa de Muro. Properties with sea views are within the area’s higher end price bracket. There is great nightlife too but that’s not the number one attraction. Port d’Alcúdia offers miles of clean, sandy beaches. It also has a big cycling scene in the Spring and Autumn. The port offers direct ferry connections to Barcelona and Menorca.

Advantages to buying a property in Alcúdia:

Types of property in Alcúdia

Alcúdia and its suburbs have it all. In the old town, you’ll find plenty of townhouses, some of which have pools. Others have been divided into apartments. Many houses boast breathtaking, panoramic rooftop views that take in the Bays of Alcúdia and Pollensa as well as the Tramuntana mountains.

The vast majority of houses in the old town have plenty of original features. Some are in need of renovation. Hiring a local architect can be crucial to get over the planning hurdles set by the town hall.

In the quieter suburbs, you’ll find plenty of huge finca-style villas, most with their own pools and some with sea views. The shore along the north side of the peninsula faces out onto the Bay of Pollensa. Here, it’s quiet and residential but with plenty of small secluded beaches. There are also some blocks of apartments with sea views.

The other side of the peninsula looks out over the Bay of Alcúdia. The suburb of Alcanada is much sought after. It’s full of spectacular villas, old and new, many of which overlook the sea. Front-line properties go for premium prices here. It’s right next to the busy resort of Port d’Alcúdia. Here you’ll find penthouse-style apartments, ideal as a bolt-hole or second home. The long sandy beach stretches several kilometres from the port to Playa de Muro. Properties here have been built right onto the beach itself. That means you can walk out of your front door and straight onto the sand.

Whether you’re modernising an old townhouse or starting from scratch with a new build, you’re going to need permission from the local council. This can be time-consuming and complex.

Much of Alcúdia is situated on the site of a former Roman settlement. This can add complications, particularly if you need to dig down. You may be obliged to hire an archeologist to sign off any planned work. It is still possible to get permission to put in a pool within the old town walls. This is something that other neighbouring towns don’t allow any more. If you want to modernise a townhouse, check that it is connected to the mains water supply and sewage system. If it isn’t, it’s likely to take even more time and a lot of bureaucracy to get things sorted.

Over the past few years, the Balearic government has clamped down on the number of tourist licenses it issues. Alcúdia old town, for example, is saturated and no new licences are being granted. It’s usually not possible to get a licence for an apartment which is not part of a ‘holiday let’ block. The rules are enforced and fines can be eye-watering. The charges and restrictions that come with the new types of licence may mean that it’s not commercially viable to rent a property out as a ‘holiday let.’ If the property already has an old style tourist licence, this can be a real plus because the licence is often transferable from owner to owner at the point of sale.

What the experts say about buying property in Alcúdia 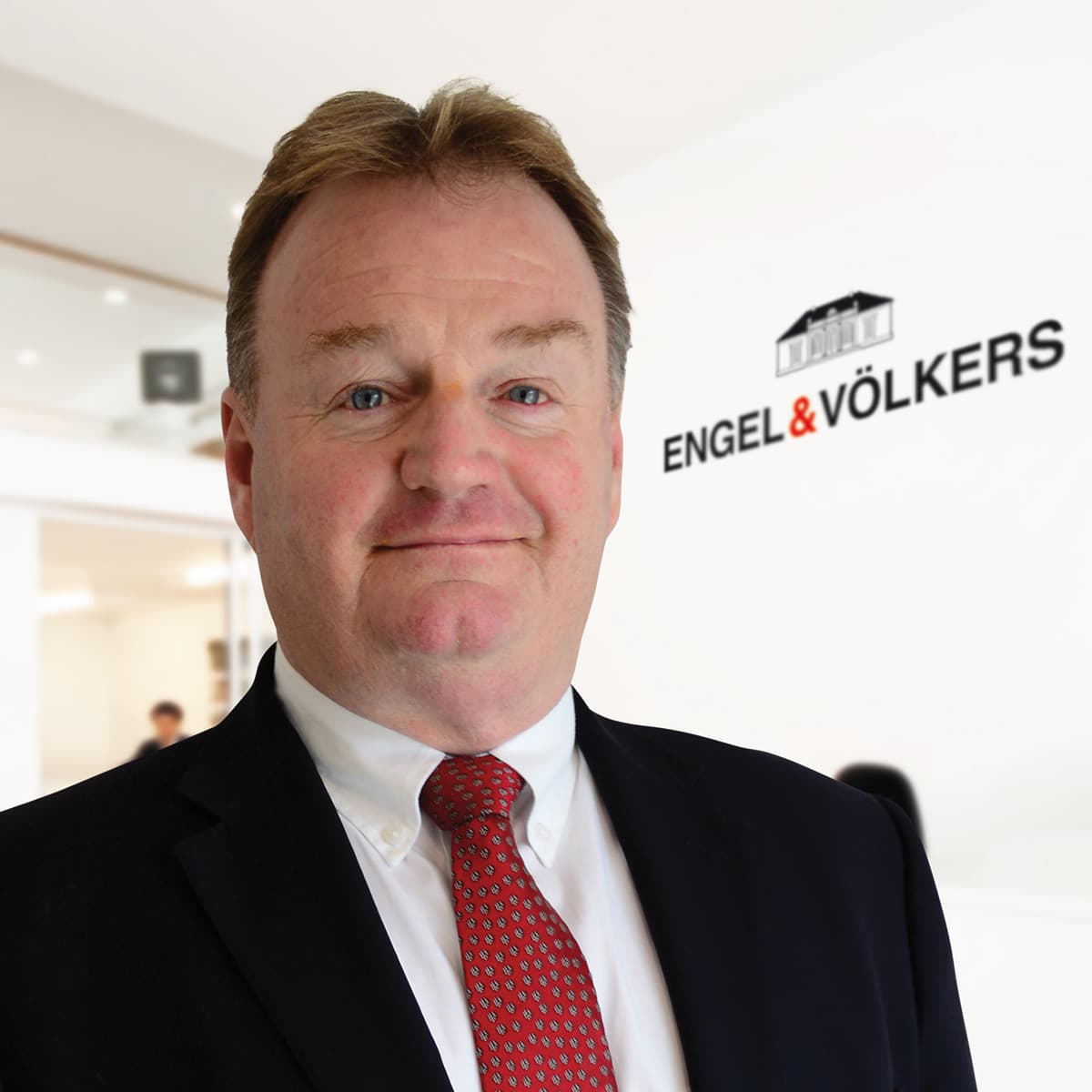 Related services to buying a property in Alcúdia

Whether you’re in need of a builder to help renovate your new home, a lawyer to help with the buying process or an interior designer to add the finishing touches, the below businesses can make your property dream in Alcúdia a reality.

Alcúdia and its suburbs have a huge range of properties available from old townhouses to classic villas. The area offers great value in one of the most beautiful settings on the island. You can easily slip into a quieter life here. It’s a wonderful place for families.
Residential seaside suburbs like Es Barcarés, Mal Pas and Alcanada are peaceful and relaxed. They offer lots of homes commanding sea views across the Bays of Alcúdia and Pollensa. There’s plenty of land too in prime locations for new builds.
If you want a little more action, a property in Port d’Alcúdia could be a very attractive option. Here you will find penthouses along with homes from which you can walk straight out onto the beach from your own front door. 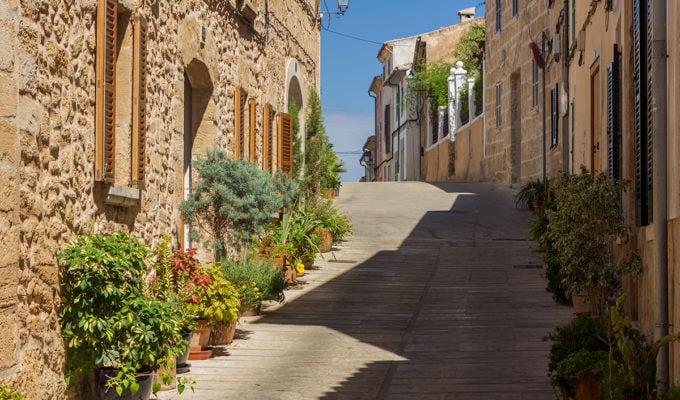 THE 13 MOST BEAUTIFUL TOWNS ON MALLORCA

A NEW LIFE ON MALLORCA