We meet British author David Coubrough in Deià, where his recently published novel Death in Deià takes place. It is a pleasure to meet him in the beautiful gardens of Belmond La Residencia where we are surrounded by “Deià tranquillity” – a feeling he is well acquainted with. Mallorca’s rugged landscape and winding roads form the backdrop to David’s gripping murder story, which serves as a sequel to his first novel Half a Pound of Tuppenny Rice.

David explains that it was only in his later years after a fast-paced career in business that he decided to turn his attention to writing. It had always been a part of him but – as most writers will know – finding the time to fully dedicate himself to it didn’t come easy. “It was always a lifetime ambition to create a space in my life to be able to write,” he explains, but his position as chief executive of a hospitality firm made it difficult. From opening an office in Hong Kong to compiling data spreadsheets, he always found his creative writing was put to one side. However, six years ago he decided to sell a business, which freed up a couple of days a week to write while still working. “Now I have the buzz for writing I couldn’t stop even if I wanted to,” he remarks, excited to reveal that a third novel is on the way, this time set in Tuscany.

David is honest about his writing journey and admits that getting published wasn’t easy. Once he had finished Half a Pound of Tuppenny Rice, a crime novel set in St Ives, England, it was about getting help from whoever he could. “Contact anyone and everyone in the literary world” was the advice given, which led David to contacting an old school friend, the famous writer Anthony Horowitz. They soon began communicating via email, and David was pleased to hear that Anthony agreed to review his work. However, this was not to go as smoothly as expected. “I waited about six weeks and I had a reply from him that went: ‘Dear David, you sent me your novel. I really wish you hadn’t. There was nothing I liked about it all.’” He breaks into a laugh. “Honestly, it could not have been worse.” It is true that with hindsight comes humour, but underneath, David admits it was a rock-bottom moment. “It was like, this is as bad as it gets and I’ve got to climb off the floor here.” And climb off the floor he did. 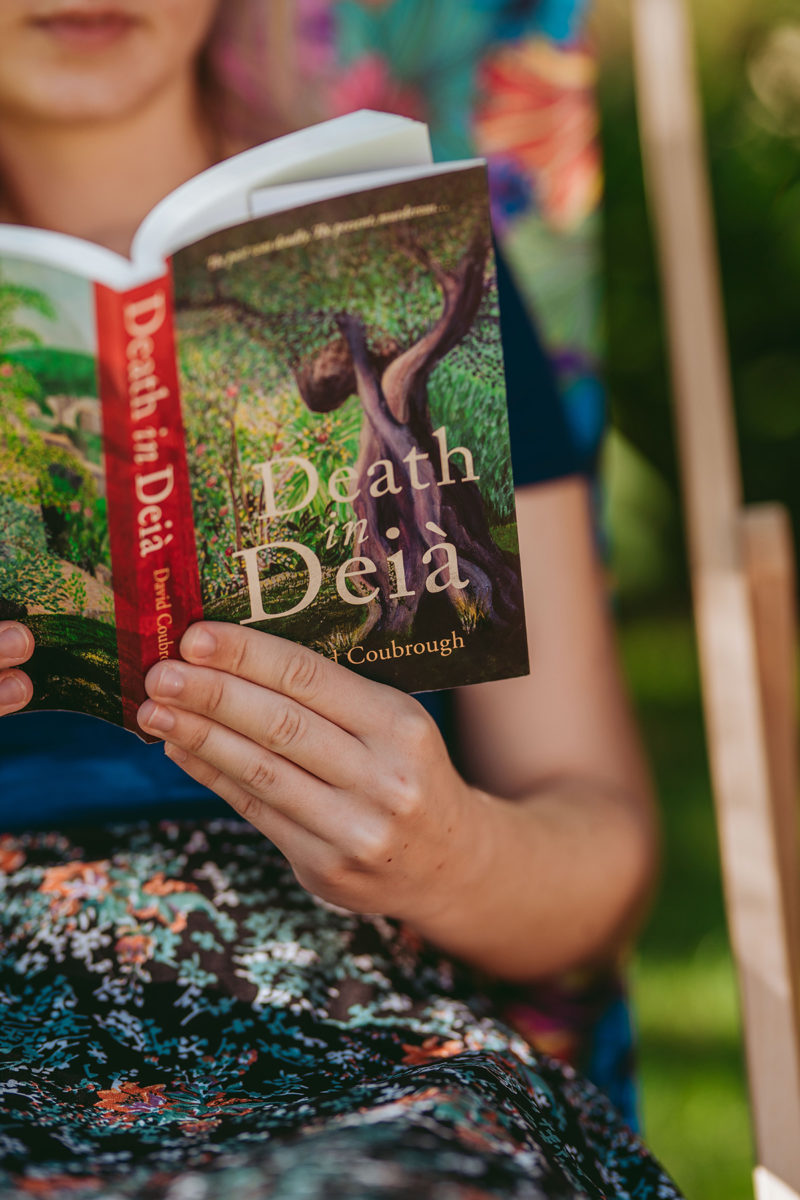 Half a Pound of Tuppenny Rice was well-received for its twisting narrative and sharp cliffhangers. Death in Deià – in the short time it has been published – has already received similar positive responses. It has been marketed well, particularly in London where its advert has been seen on the Tube and on billboards across the city. The narrative follows the same characters as the first, but as David rightly emphasises, it works too as a stand-alone novel.

The energy in Deià, both beautiful and dark, is what David believes inspired a lot of his creativity. “There’s a kind of broodiness to Deià. There is often this really broody sky that feeds into this sense of foreboding,” all of which he confirms created the perfect backdrop to work. His wife, Victoria, also felt inspired by Deià’s creative energy and followed her passion to paint. In fact, the front cover of Death in Deià – of an olive tree in the grounds of Belmond La Residencia – was painted by her. We walk over to see the famous tree, and David acknowledges how fortunate he feels to share his story and inspire others. He regularly speaks at literary festivals in the UK to emphasise that it’s never too late to follow your passion. “If you really want to do it, be determined, and be prepared to get rejections,” he says, “and above all, never take it personally.”

Death in Deià is available in Rialto Living in Palma.

Loved by Deià, cherished by the art world